The dates were chosen to commemorate two key historical events: Independence Day, honoring the formal signing of the Act of Independence for Costa Rica, El Salvador, Guatemala, Honduras, and Nicaragua (September 15, 1821), and Mexico’s Independence Day, which denotes the beginning of the struggle against Spanish control (September 16, 1810). In 1988 the event was expanded to a month-long period, and now encompasses:

In celebrating National Hispanic Heritage Month, we would like to share more information about this rich culture.

How is Hispanic Heritage Month celebrated?

During the month, Hispanic Heritage is celebrated in many ways, including parades, art exhibitions, concerts and traditional Hispanic food fairs. 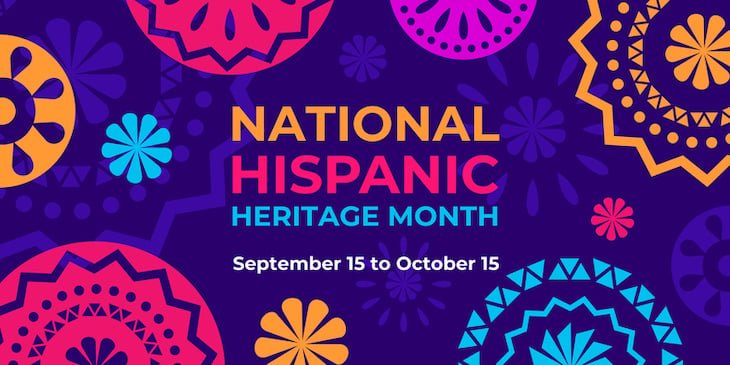 The term Hispanic was coined to classify those people of Latin American and Spanish origin, whose ancestors came from Spain, Mexico, the Caribbean and Central and South America. The term is often misused in the United States as a racial classification instead of a regional one.

Someone who is Hispanic can be of Indian, African, European, or Asian descent, and because of the stereotypes and misconceptions, many Hispanics are not recognized as such. Lynda Carter (Wonder Woman), Frankie Muniz (Malcolm in the Middle), and Jean-Michel Basquiat (an American Artist) are all of Hispanic ancestry but are never regarded as Hispanic.

The Hispanic population of the United States as of July 1, 2019, was 60.6 million, making people of Hispanic origin the nation’s largest ethnic or racial minority. Hispanics constituted 18.5% of the nation’s total population.

There are words that we regularly use that we may not realize are of Spanish origin. Words like mosquito or oregano are used in the English language in their original Spanish spelling and pronunciation, but some, like the following, have been altered.

Breeze: meaning a light wind or current and originates from the Old Spanish and Portuguese word briza.

Cafeteria: This word dates back to 1839 from Mexican Spanish, meaning coffee store

Did you know these words were of Spanish descent?

Learning about the history and significance of different cultural celebrations and educating yourself about the contributions made by different groups of people is an important first step to create a society built on mutual respect and admiration for different races, ethnicities, religions, and more. In celebration of National Hispanic Heritage Month, check out some more facts from Women's Health Magazine.