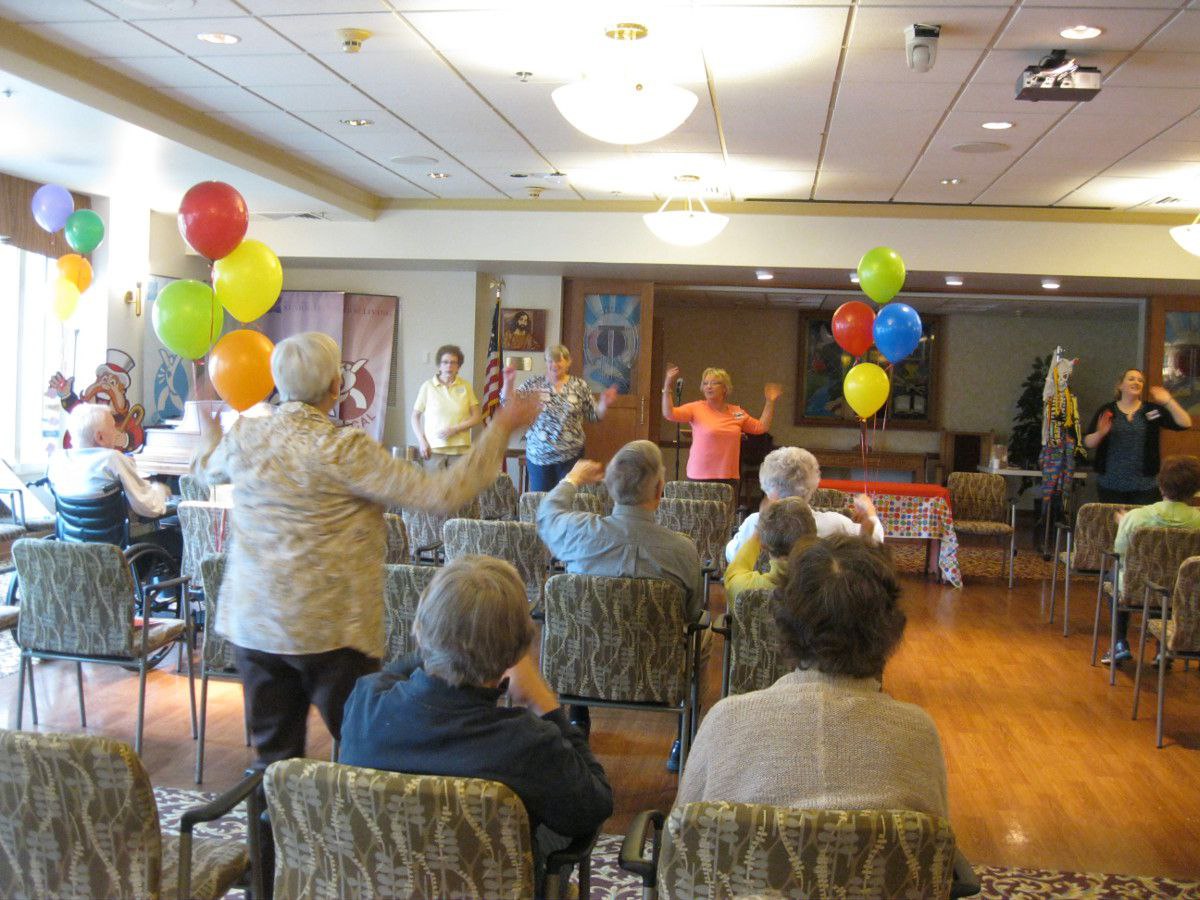 Grandma Brings the Laughs at Humorcon at Kirkland Village 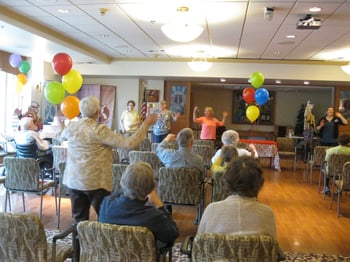 Kirkland Village participated in National Humor Month by hosting "Humorcon", which had the senior audience cracking up at the stand-up comedy routines of their fellow residents. Laughter is an important part of living, no matter what the age. When younger, it's a sign of happiness and enjoying life. Laughing helps us get through the hard spots in life by laughing at ourselves instead of taking everything so seriously. But as we get older, the act of laughing helps reduce stress, can help in coping as well as healing and relieving symptoms of certain diseases.

Kirkland’s Community Life Coordinator, Catherine Stom, had this to say about the 2nd Annual Humorcon:

All residents and staff of the community were invited to attend and perform. Performers included Independent Living residents, staff members, as well as outside entertainers. The event included acts such as Laughter Yoga, Whistles the Clown, Comedy Duo Marga-Rita, a magic show, and a mock Resident Town Hall Meeting. In addition to these performances, Kirkland also offered a Photo Booth, freshly popped popcorn, and refreshments. The Auditorium was full all day and there were few moments when laughter could not be heard. Following the success of this year’s event, the planners of Humorcon are already brainstorming new ideas to bring residents and staff together for a day full of fun and laughter. Laughter also seems to improve memory and increases the ability to learn. So as the resident comedians got the chance to stand up and tell a few jokes or personal stories, the audience benefited in more ways than one.

One of the stars of the show was a resident named Priscilla Brekus, who is 87 years old. She actually admits to being only 30 years old, but with 57 years of experience. As the humorous and insightful mother of four boys, she had many personal stories about raising children to share with her peers.

She related stories of their spelling tests, which included four-letter-words that were not on the official spelling list, but were in fact spelled correctly. She went on to describe details of the types of sexy flannel lingerie that older women wear. She had the audience bursting in laughter, as they could all relate to her experiences as a mother and as an aging woman.

But telling jokes isn't all that Priscilla is good at. From the internet, she learned how to do a pretty good strip tease. At a talent show held at Kirkland Village, she displayed her newly developed skills as she performed a skit that had her stripping down to her swimming suit on stage. I'm sure that got more than just a few laughs from the surprised residents!

Laughing is a universal language with many positive side effects. It strengthens positive physiological, emotional and mental responses as it aids in helping the physical body relax. It can balance out the stress hormones, which in turn can help alleviate physical symptoms. It encourages the release of endorphins (yes, similar to those in dark chocolate!) that  can make the person feel good about themselves. Not to moan and groan about getting older and more forgetful, but to actually feel better! 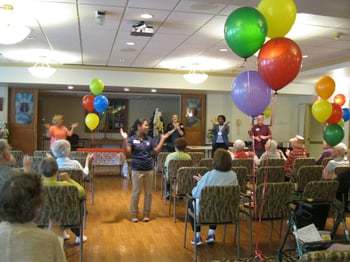 In all of the Presbyterian Senior Living Communities, attention is given to the whole person. We want to encourage and strengthen their ability to recognize the signs of growing older and accept them as a natural part of life. Instead of regretting or feeling sorry that they're not 20 anymore, we want residents to celebrate the new era they entered and enjoy it! And what better way to do this than through laughter!

We encourage our residents at Kirkland Village to create their own experiences by engaging in the activities that are important to them. Kirkland is a Continuing Care Retirement community that helps people with resources lead fulfilling lives through Masterpiece Living. Through creative activities and programming, we empower our residents to focus on not only physical, but social, intellectual and spiritual needs.