If we are to believe the political and social pundits of our day, we live in a time that is often described as angry.

Anger is Not an Abstract Idea 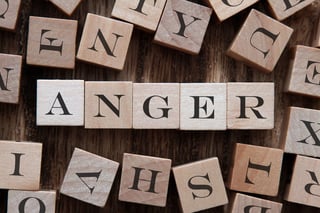 We often see it up close in airports, on the highways, in restaurants and hospitals – anywhere where people come in contact with each other. Sometimes it surfaces in the provision of services to seniors. We also know from personal experience that some people are more naturally prone to anger than others. Groups like the Mayo Clinic have developed techniques to deal with anger on a personal level, and individualized professional help may be required in more extreme and persistent circumstances.

While we may not be able to transform the angry environment around us, it is helpful to explore the emotion of anger, how it affects people in leadership positions, and what leaders can do to set a more positive tone in an environment where people need to work together toward a common goal.

The first step is to recognize that everyone has the capacity to become angry. No one is immune because it is a part of the human experience. Moses - my personal hero as a leader - personified patience and dignity as the leader of a newly forming nation. He was uniquely described in the book of Numbers as meek (or humble) and in the book of Deuteronomy as someone whom “the Lord knew face to face”. Early in his life he impulsively killed a task master who was beating one of his people, an act that led to his spending 40 years in the wilderness. Many years later in a moment of anger over the complaints and rebellion of his thirsty followers, this paragon of virtue struck the rock twice to obtain water, which resulted in his being denied entry into the promised land. Anger can afflict any person and result in terrible consequences. 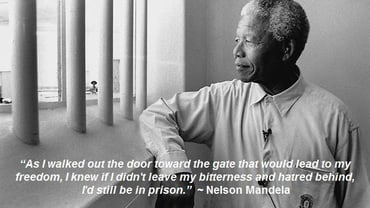 Secondly, there is great advantage for the leader who can avoid anger in the most extreme circumstances. Nelson Mandela, who was imprisoned in South Africa under apartheid for 27 years, had every right to be angry and bitter based on the treatment he had received. His character as a leader is revealed in two profound observations –

“As I walked out the door toward the gate that would lead to my freedom, I knew if I didn’t leave my bitterness and hatred behind, I’d still be in prison.”

“Resentment is like drinking poison and then hoping it will kill your enemies.”

These insights prevented the angry response and retribution that could have defined his time of leadership as South Africa’s first democratically elected president as the head of the Government of National Unity in 1994. Instead he presided over the transition from minority rule and apartheid, winning international respect for his advocacy of national and international reconciliation.

Thirdly, it is my belief that the nearly all positive attributes required for effective leadership cannot survive in the presence of anger. This is especially true of servant leadership, one of PSL’s core leadership values. Notice the contrast between anger and the following definition of servant leadership from the February issue of Reflections on Leadership:

Servant leaders - are patient, kind, are not given to envy, are not boastful, not self-serving, are not easily angered, keep no record of wrongs, do not delight in evil, are truthful, protect, trust, persevere...

This is confirmed by two Biblical references, one from the book of Proverbs “People with understanding control their anger; a hot temper shows great foolishness.” (Proverbs 14:29), and from the New Testament book of James – “Be slow to speak and slow to anger” (James 1:19). But perhaps the harshest words regarding anger come from the words of Jesus in the Sermon on the Mount in the Book of Matthew (v 21 – 22) where he compares the emotion of anger with murder.

So how do we follow these examples and directions in our day to day responsibilities as leaders? Here are a few practical suggestions:

• When you recognize anger in yourself or those around you – take a break or try to diffuse the anger so that a clear headed discussion can be held.

• Do not use fear or anger to get what you want – both are difficult to control, and there are always unintended consequences that will come back to haunt you later.

• Never make an important decision when you are angry. Delay a final decision until you can look at the circumstances through a less emotional lens.

• When in doubt about your own objectivity, use the counsel of someone you trust to help determine if you are overreacting to the circumstances before you.

• Do not give in to those who use anger as a primary tool in their relationship with others. This only rewards bad behavior and dooms you to repeat the experience in the future, only with a different set of circumstances.

• Provide constructive outlets for divergent opinions, even for controversial topics.

• Insist on a respectful tone in communications between your team members by setting down ground rules for a healthy dialogue.

• When working with your team, do not let angry team members dominate the conversation or override the more introverted or less forceful members of your team.

• Do not be afraid to intervene to protect your team members from taking the brunt of angry or disrespectful behavior from other staff or customers.

• It is good to resolve differences as soon as possible. Harboring anger only leads to bitterness. The Apostle Paul’s words from the book of Ephesians are instructive in this regard – “Do not let the sun go down on your anger.”

There are a so few occasions where the use of anger is appropriate that I will not attempt to explain its constructive uses other than to say that there is such a thing as righteous anger – a characteristic usually attributed to God. Unfortunately when expressed by human beings, it almost always takes the form of self-righteous anger – less virtuous in form and inherently more destructive than righteous anger.

Finally, it has been my experience that whenever a leader takes action in anger, there is a high probability of a poor decision or negative outcome. Maintaining a sense of equilibrium when others are driven by anger or impulse is widely admired and the clear mark of a mature leader.