Reflections on Leadership: Facing Your Giants

In 2008 my wife and I had the privilege of traveling to Israel. Part of the trip included visiting the place where the conflict between David and Goliath took place – the valley of Elah. For those who have not read the story, it can be found in I Samuel Chapter 17, verses 1-54. It is rich with detail as a titanic struggle between good and evil. For a few minutes I was able to touch the stones in the stream where scholars believe the young shepherd boy David collected 5 smooth stones in preparation for fighting the giant Philistine warrior Goliath. The images were striking. I could almost feel the drama of the story unfolding, imagining the thoughts of a shepherd selecting the stones that he was going to use in this life or death conflict.

At first glance David was not the logical one to take on such a daunting task. For several days Goliath had taunted the army of Israel, daring them to send out their best warrior to fight to the death. It was easy to see why no one had the courage to respond to the challenge. Goliath of Gath was a huge man. Depending in the source of the biblical text, his exact height was somewhere between 6 feet 9 inches and 9 feet tall. He was an experienced warrior, well equipped for battle. Heavily armored with a bronze helmet, a coat of mail and javelin, the shaft of his spear was said to be “as large as a weaver’s beam”. In the face of such a scary image, the morale of the army of Israel was understandably low. The bible record was that they were “dismayed and greatly afraid”. 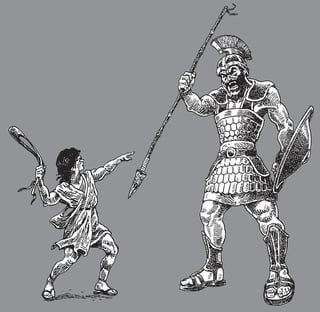 The description of David was much less impressive than that of Goliath. He was a “youth, ruddy and handsome in appearance”. Goliath also had a trash talking warrior’s attitude. Upon discovering that David was willing to accept the challenge, Goliath regarded David with disdain, shouting “Am I a dog that you come to me with sticks? Come to me and I will feed your flesh to the birds of the air and the beasts of the field”.

In his book, “Facing Your Giants”, Max Lucado uses the story of David and Goliath to illustrate that personal and professional challenges require the same strength and courage as challenging a giant on the field of battle. It is his contention that eventually everyone has to face a giant at some time in their life, and the lessons that can be learned from this Bible story can be applied to other seemingly insurmountable problems. Grief, family conflicts, economic failure, shattered dreams, ethical dilemmas, and loneliness are just a few of the issues that he identifies as common giants that require an uncommon response. This resonates with my experience. If you take the time to listen to those around you, almost everyone has a story that includes particular issues or times in their life when they were severely challenged by circumstances or individuals that pushed them to the point of despair.

What does this story have to do with Leadership? First of all, leaders often struggle in the work they are called to do. Challenges can take many forms, like threats in the market place, financial pressure, the need for immediate and dramatic change, deciding who to trust and how to delegate when the margin for error is slim, disappointment in or betrayal of a co-worker, delivering bad news to the people you lead, or doing the right thing when the result is costly. The list goes on and on.

Some time ago I heard a vivid example of courageous leadership in an interview with former Marine, Donavan Campbell, as he described his platoon’s experience in Iraq in the book, “Joker 1: A Marine’s Memoir”. He noted that he had two basic objectives as the leader of his platoon – completing the mission with integrity and bringing his men home safely. One afternoon while on patrol, his platoon was attacked by a rocket that struck a group of nearby civilians, killing or wounding more than 20 children. He was faced with the dilemma of evacuating his men, knowing that another attack was inevitable if they remained in place, or staying to protect the school where the children were being held until medical attention could arrive. He chose to keep his men in place to protect the children, which ultimately cost the life of one of his soldiers. This is what a leader does when facing a giant.

What are the lessons in leadership from the story of David and Goliath?

But there is more to the story than pure courage in the presence of adversity. In his book, 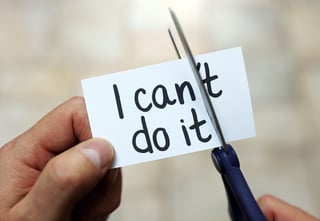 “David and Goliath”, author Malcolm Gladwell points out that although David was powered by courage and faith, he also possessed a different set of skills. Instead of the close contact fighting that Goliath was expecting David had other ideas. Focused on speed and surprise with a different kind of weapon he fearlessly ran forward with his sling and bag full of stones. The outcome was not as surprising as one might imagine. Gladwell quotes historian Robert Dohrenwend, “Goliath had as much chance against David as any bronze age warrior with a sword would have against an opponent armed with a .45 automatic pistol.” The bulk of Gladwell’s book focuses on stories of underdogs and how they battled the giants in their lives.

Gladwell contends that in today’s constantly changing environment the key to success often rests with changing the techniques of battle, exchanging size and strength for speed and agility. In this context, courageous leadership involves embracing new approaches and making decisions faster than others who may possess greater wealth and raw power.

Next to the compass and picture of my wife and family I now keep a rock on my desk from the brook in the valley of Elah. It serves as a symbol of faith and readiness for whatever the future may hold. It is also a symbol of how the willingness to embrace change can overcome even the most formidable and scary challenges that leaders face each and every day.