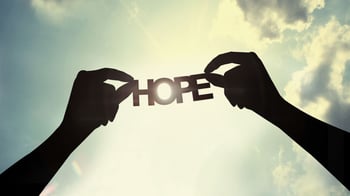 “Hope springs eternal from the human breast” - Alexander Pope’s famous line from An Essay on Man, strikes a chord with me at a very deep level. We not only have hope for ourselves and for those we love in our day to day living, we are also inspired by stories of people who overcome great difficulty and enormous odds, never giving up hope, even when others around them gave in to despair. One such story is the story of Corrie ten Boom, a Dutch Christian who, along with her father and other family members, helped many Jews escape the Nazi Holocaust during World War II. Imprisoned for her actions, her most famous book, The Hiding Place, describes a journey of faith and hope as she lived through a horrible ordeal.

Hope. To cherish a desire with anticipation. Assurance in the possibility that what one desires or longs for will happen (Webster). It seems that some people are able to tap into the power of hope as a way to move forward to overcome obstacles and achieve great things, while others are driven into hopelessness and despair by the same set of circumstances. This reality raises a number of questions:

The evidence suggests that hopelessness and hope can both be learned. In my college years I recall reading a study that involved placing a pike (a voracious predatory fish) in a tank that was separated into two parts by a glass partition – one containing minnows, and the other containing the pike. After some time interval and many unsuccessful attempts to reach the minnows, the pike’s feeding instincts ceased completely. It became hopeless. Even when the glass partition was removed and the minnows were easily accessible, the pike did not feed and ultimately starved.

While acknowledging a person’s basic inclinations, a number of authors talk about ways to nurture hope in children, how to engage in hope building exercises, and adopt other hope restoring strategies.

Hope may come more naturally to some people than others, but there is ample evidence that attitudes and human behavior in this area can be changed over time. Hope like many other positive attributes can be cultivated.

What do people who study hope have to say about where hope comes from and how it is practically used? C. Richard Snyder published six books about Hope Theory, and over 260 articles about the impact that hope can have on aspects of life such as health, work, education, and personal meaning. He defined hope as “an emotional state accompanied by clear thoughts about what the future can be and how to get there”. He contends that there are three main things that make up hopeful thinking:

Anthony Scioli in his book, Hope in the Age of Anxiety says that, “The science of hope comprises two divergent traditions: one that has focused hope on the individual, and other that highlights external sources of hope.” Combining these two points of view it would strongly suggest that hope is more than just a feeling. It also contains an element of action and a definite external source.

Noted leadership author Richard Boyatzis sees hope as a key part of what he calls “Resonant Leadership”. He asks the question, “Does the leader create an overall positive emotional tone that is characterized by hope?” From his perspective hope is an essential ingredient in leadership. Leaders must have hope, because hopeless people generally lack energy and purpose and cannot inspire others to move together in a positive direction. Applying hopefulness to a leader’s behavior, he says that leaders who demonstrate hope provide 3 key lessons:

These keys to hope and leadership hold up pretty well when things are going smoothly. But what about the times when hope is harder to come by – when morale is down and the team is facing an uphill climb?

In his classic leadership book, Good to Great, Jim Collins refers to the “hardiness factor” as one of the reasons that some organizations prevail and succeed while other companies fail. His most vivid example of this hardiness factor was something he called the Stockdale Paradox. He describes his interview with Admiral Jim Stockdale, who survived 8 years of imprisonment and torture during the Vietnam war. When he asked Stockdale about how he was able to deal with the circumstances, he replied, “I never lost faith in the end of the story. I never doubted not only that I would get out, but also that I would prevail in the end and turn the experience into the defining event of my life, which in retrospect, I would not trade.”

But the startling thing about Stockdale’s story was that he observed that the optimists were the ones who did not make it out, stating that “You must never confuse faith that you will prevail in the end – which you can never afford to lose – with the discipline to confront the most brutal facts of your current reality, whatever they may be.” Herein lies the paradox - Retain faith that you will prevail while confronting the stark reality of the circumstances. Hope must never be separated from reality.

Looking at the intersection between hope and leadership I have a few personal observations:

In my experience, the role of hope in leadership cannot be overstated. The vision to move boldly into an uncertain future requires hope. The courage to embrace change depends on hope. The trust that is essential to all human relationships is based on hope.

I believe that Martin Luther King, Jr. said it best – “Everything that is done in the world is done by hope.”