The period of time leading up to and following the recent elections can best be described as a time of great anxiety. Many voters, worried about their declining standard of living and loss of job opportunities, voted for a change in direction. In the weeks following the election, others have been worried that the changes that may be coming will leave them worse off than before, and are anxious about the future. 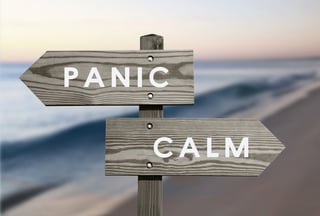 Worry is not just a general state of mind. It most often has a decidedly personal dimension – the health and well-being of those we love usually tops the list. Worry can be rooted in the reality of present circumstances, or a feeling of impending doom - that there is something that we do not yet know about that may occur to upset our otherwise tranquil existence.

When I began as a nurse with Presbyterian Senior Living 45 years ago, one of my favorite residents was known to be a constant worrier. At nearly 90 years old, she was blessed with a loving and attentive family, which included three Presbyterian pastors. They all lived at a distance, but arranged to speak with her at previously arranged times every week.

In spite of a complete lack of evidence to the contrary, her mind was filled with worry about her family’s health. One afternoon during a telephone call with her son in North Carolina she was cut off unexpectedly. In the 5 minutes that it took to reconnect, she became convinced that her son had experienced a heart attack and had died. It was only after getting him back on the phone and hearing the sound of his voice that she was able to calm down and acknowledge that her worry was unfounded. Later I spoke to her about her constant worrying and jumping to conclusions. She responded, “I know that I should not
worry so much. Actually, I pray about this often, because I am worried that my worrying is a sin.” I was speechless. She actually found a way to worry about her tendency to worry.

The truth is that worry is a part of everyone’s life at one time or another. Over the years I have learned a few things about the cause and effects of worry:

Most of what we worry about does not happen, and the time spent on worry can rob us of the joy of the moment. It seems that the daily news is filled with stories of bad things happening to people who are going about their business when tragedy unexpectedly intervenes. The cumulative effect of this message can be chilling. In his book, The Last Child in the Woods, Saving our Children from Nature Deficit Disorder, author Richard Louv talks about the “Bogeyman Syndrome” – the fear of traffic, of crime, of stranger danger, and of nature itself. While there is scant hard evidence of increased risk, this worry has led to a reduction in boundaries where a typical 9 year old child is allowed to roam to 1/9 of the space that children were given freedom to play only 20 years earlier. Louv would argue that worry is keeping our children and grandchildren from experiencing independence and the wonder of nature, and that lack of experience will cripple them in the future.

Worry is often based on having a short term perspective. In his book Sabbath, Finding Rest, Renewal, and Delight in Our Busy Lives, Wayne Muller tells the following story:

“There is an old Taoist story about a wise man on the northern frontier of China. One day, for no apparent reason, a young man’s horse ran away and was taken by nomads across the border. Everyone tried to offer consolation for the man’s ill fortune, but his father, a wise man, said, ‘What makes you so sure that this is not a blessing?’

Months later, his horse returned, bringing with her a magnificent stallion. This time everyone was full of congratulations for the son’s good fortune. But now his father said, ‘What makes you sure this isn’t a disaster?’ Their household was made richer by this fine horse, which the son loved to ride. But one day he fell off the horse and broke his hip. Once again, everyone offered their consolation for his bad luck, but his father said, ‘What makes you so sure that this is not a blessing?’

A year later the nomads mounted an invasion across the border, and every able bodied man was required to take up his bow and go into battle. The Chinese frontiersmen lost nine out of every ten men. Only because the son was lame did the father and son survive to take care of each other. Truly the story reminds us, blessing turns to disaster, and disaster to blessing: The changes have no end, nor can the mystery be fathomed.”

The lesson here is that we never fully know if something that is troubling us at the moment is a bad thing or an opportunity for growth or blessing. Only time will reveal the truth. Worry will only make us miserable until we find out one way or the other.

Worry is not always bad, especially if it inspires a positive change in direction. Those who never worry may become so content that there is no inspiration for change that requires leaving their present comfort zone. The key is to channel the concern into identifying what in the situation can be changed, identifying a goal, and creating a plan of action.

Leaders who are preoccupied with worry often avoid taking the risks required to achieve success. Aside from making a leader a slow decision maker, constantly expressing worry can inhibit the process of building a team of high achievers. It is my experience that people rarely flock to leaders who are racked with worry about the future. Conversely, an underlying sense of calm (not arrogance) is a very attractive leadership trait.

Finally, some circumstances cannot be changed and require acceptance rather than worry. Jesus addressed the tendency to be anxious by asking a simple question – recorded in Matthew chapter 6. “And which of you by being anxious can add a single hour to his span of life?” I especially like the King James version of this particular verse - “Which of you by taking thought can add one cubit unto his stature?” Do you think you can live longer (or become taller) if you worry about it?

I believe that the only way to escape the paralyzing effects of worry is to accept that a large portion of life and the future is unknowable. This lack of knowledge is not something to be feared. Knowing every turn in the road of life would rob us of the sense of wonder and surprise that makes life interesting.

One of the best ways to combat worry is to be able to share the burden of worry with someone you trust. Getting an outside perspective can help to identify events that are unlikely to occur, provide a longer view and balanced outlook on what is going on around us, help to form a positive plan of action when necessary, or simply find comfort in a sympathetic ear. We all need that kind of help from time to time, and we can all provide that help to someone else in a time of need. Reaching out in this way is not a new idea. The words of the Apostle Paul in chapter 6 of the book of Galatians still speak to us today.

“Bear one another’s burdens and so fulfill the law of Christ.”