Today we celebrate those veterans who served our country. We owe you our thanks, but more than that, we owe you our freedom. There's no way to thank our veterans for everything they sacrificed for our freedom, but on Veterans Day, we have to try. So, thank you to all our service men and women! Below we have highlighted a few stories from veteran residents at our various communities.

William F. Moreland, a resident of Ware Presbyterian Village, served in the United States Navy on the USS Pennsylvania BB38, USS William C. Lawe DD 763, and the USS Snowden DE 246 during WWII, the Korean War, and the Cold War from 1944 to 1954.

His father owned commercial ships, so he grew up around ships and decided to enlist in the Navy at 17 years old. He completed basic training in Northern New York. After basic training he attended radio school in Indianapolis, Indiana. After he could send 20 words per minute in Morse code, he was able to leave to board his first ship with the Navy. William then traveled to Bremerton, Washington and boarded the USS Pennsylvania.

On August 12, 1945, he was in his quarters mid ship before starting captains watch on the USS Pennsylvania. On this morning, the USS Pennsylvania entered Buckner Bay at 2045. As the ship lay quietly at anchor, a Japanese torpedo plane slipped in over Buckner Bay without any warning. It launched its torpedo at the indistinct silhouette of the large warship. The torpedo hit well aft on the USS Pennsylvania’s starboard side and did extensive damage. Many compartments were flooded, and the ship settled heavily by the stern. But, by the Herculean efforts of the ship's repair parties and the prompt assistance of two salvage tugs, the flooding was brought under control.

Nineteen men in a living compartment just inboard of the explosion scene and one other man were killed by the force of the blast. Ten others were injured.

On the morning of August l5, 1945, three days after the attack on the USS Pennsylvania, Captain Moses spoke over the loudspeaker and informed the crew that the President had just announced Japan's acceptance of the allied surrender terms. There was no wild cheering, instead there was a minute of utter silence as the men paid homage to their shipmates who had lost their lives so near the very end days before. 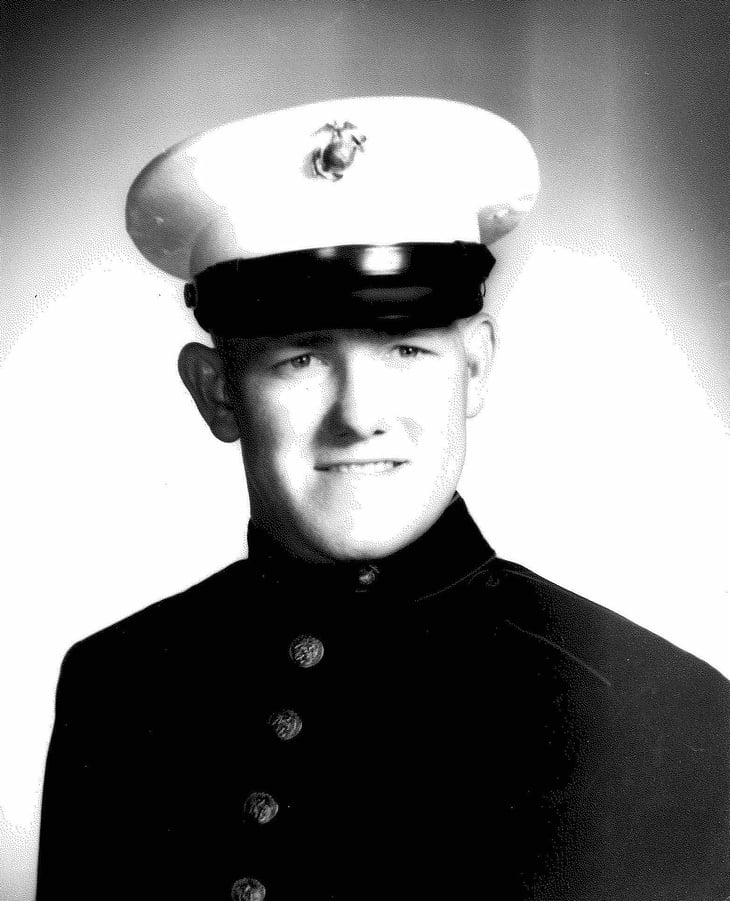 Gerald “ Jerry “ Craig, a resident of St. Andrew's Village, served in the United States Marine Corps in Okinawa during Peace time from 1957 to 1959. Jerry enlisted in the Marine Corps at the age of 19 because he had several friends who were also joining the military. Jerry completed basic training at Parris Island in South Carolina, Camp Lejeune in North Carolina and then finished training at Camp Pendleton in California. Jerry was stationed in Japan for about one month and was then taken out of Japan and sent to Okinawa as Sergeant Gunnery. After 13 months in Okinawa he returned to Georgia until 1959 when he was discharged as a Corporal. Jerry stated he spent most of his time boarding up the boat for typhoon threats.

Jon Hockenbury, a Presbyterian Village at Hollidaysburg resident, experienced the Great Depression and World War II—the generation to whom we Americans and the world owe so much.

For the most part, his youth was not unlike that of other boys from the south central part of Pennsylvania. That means that he grew up with a love of his country and an appreciation of its values. When World War II was raging around the world, those values and love of country motivated John to enlist in the United States Army.

He was then ready to be assigned to the seasoned 36th Infantry Division as a replacement rifleman. John went immediately into the line when his division spearheaded the allied landing against intense German opposition at Salerno on Italy's coast. The division then footslogged its way up the Italian boot through rain, mud, winter cold, and summer heat. It crossed mountain ridges, similar to those located in Pennsylvania’s Ridge and Valley System—each ridge defended by experienced enemy soldiers—until the end of the Italian campaign.

John was engaged in constant combat during this campaign. The division continued to fight on through France and Germany to war’s end in Austria. What an experience for John!

John is eager to tell readers why we won the war. “The reason is simple,” he said. “German and Japanese soldiers were over-trained to take orders—no independent thought. They had to wait for orders to come down the chain of commands before taking action, then response was determined by prescribed training methods. On the other hand, American soldiers were allowed to act on their own and make instant decisions according to the present battlefield situation.

Bernadette Jablunovsky, a resident of St. Andrew's Village, graduated from Pittsburgh School of Nursing in 1959, following in the footsteps of many of her other family members that were nurses. From nursing school, Bernadette had a calling to join the United States Air Force in 1961. Her first assignment was at Bunker Hill Indiana. She was then stationed in the Azores Islands in Portugal for one and a half years. After that, she returned to the United States to Washington D.C. During her time in the Air Force, Bernadette was a flight nurse based in Germany and Illinois where she took care of many soldiers from the Vietnam War.

Bernadette stated, “During my first experience caring for all the casualties of war I wondered if it was worth it, as the injuries were so acute.” She said it took her a while to understand the war and see the reason behind war. Bernadette said,” I found strength from deep within and felt like I received 18 years of nursing training in a matter of a few months." Bernadette retired as an Air Force Nurse in 1989. She said, “The military was a very rewarding and fulfilling job that taught me so much about compassion and the importance of helping others.” Bernadette is receiving a promotion in the photo shown where she was promoted to Lieutenant Colonel.

Roger Petersen, a resident of St. Andrew's Village, served in the United States Army at the tail end of the Korean War around 1957. Roger was sent to Germany for his basic training where he was asked by his Commanding Officer a simple question: “Do you play the piano?" To which Roger replied, "As a matter of fact, I do play the piano." Roger said that conversation led him to become the Chaplain’s Assistant/ Personal Secretary to the Commanding Officer.

During this time Roger proudly stated he organized a Vacation Bible School, which became the largest Vacation Bible School outside of the United States. Roger proudly informed us that over 600 civilians attended bible school in Kaiserslautern, Germany. Roger worked as a Pastor in Illinois and Minnesota and retired from the Presbyterian Church in Blairsville, PA. He earned his Doctor of Ministry at Pittsburgh Theological Seminary. Roger previously earned a master’s degree from Loyola University Chicago in guidance and counseling and said the military is what led him on this wonderful life journey. 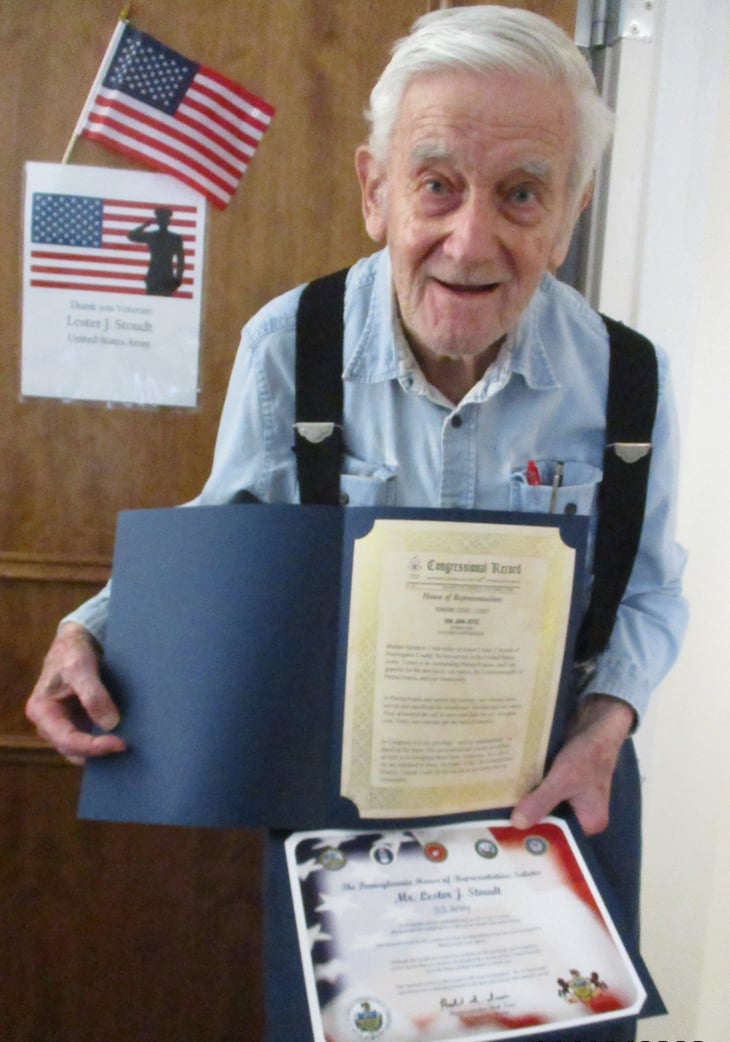 Lester Stoudt, a resident of Westminster Woods at Huntingdon, is a veteran of the United States Army and served his country in World War II in the Pacific corridor. Lester was sent to replace soldiers who were being sent home. As he was en route to his post he learned that the atomic bomb had been dropped. While stationed in the Pacific, Lester established a friendly rapport with the native children who addressed him as Mr. Joe (GI Joe). Lester teared up as he told the story of how at the end of his tour the children chased his train as it pulled out of the station calling “Don’t go Mr. Joe, don’t go”.