Today we wish you a very Happy Thanksgiving! To spread the holiday cheer, we'd like to take a moment to reflect on the Thrive Olympic Challenge and the benefits it brought to not only the residents who participated but also surrounding communities as a whole.

Over 35 residents across PSL communities met in July with team members to plan the events, and it was imperative to residents that not everything be competitive. Residents decided to have three competitive events: "Move-A-Thon," Nature Scavenger Hunt, and the Art/Photography contest, while the other events would be non-competitive opportunities for fellowship and a common purpose among residents living in PSL communities. As a result of some of these challenges, PSL residents had 9,150 hours of movement across all communities for the month of October – a whopping total of 36,598 total miles of movement!

In other words, residents could have moved from the PSL Corporate office in Dillsburg, PA, to San Francisco and back six times!

Or, since the earth's circumference is roughly 25,000 miles – almost one and a half times around the planet!

Additionally, a very significant and impactful purpose came forward right away, as residents decided, in line with the Vocational dimension of Thrive Wellness, to collaborate in their communities to collect socks for the homeless living in their local communities. Residents had a strong desire to give back and positively impact the lives of others in need.

Thanksgiving is a special time of the year– a time when we reflect on the things we hold near and dear to our hearts and the things in our lives for which we are thankful. As residents planned to collect socks for the homeless, a powerful spirit of giving sprung forth in each community. Residents called other residents asking how many socks they were donating and what else was needed. What more could they do? What more could they give? 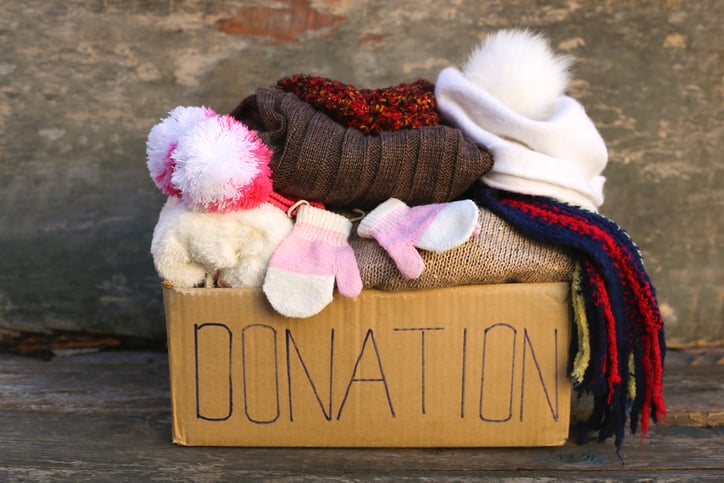 Yes indeed, 'tis the season – the giving season across Presbyterian Senior Living. Donating items to those in need enabled residents to come together with a clear, common purpose to positively impact people living in the greater community outside the boundaries of their Life Plan community itself. One of the items most needed at local homeless shelters is clean, brand-new socks.

However, PSL residents didn't just stop there. In addition to the donations of socks, the spirit of giving called residents to donate six SUV truckloads of clothing to Afghan refugees and several truckloads of baby/children clothing, diapers, towels, personal care items and laundry supplies to a domestic abuse and shelter organization.

During this season of giving, residents made a tremendous, positive impact on the lives of many people in need. As the total numbers of donations were collected, it soon became apparent just how much of an impact residents had made:

Across all Presbyterian Senior Living communities – a total of 3,424 brand-new pairs of socks were donated to the homeless living locally around PSL communities!!

For residents, the inaugural fall Thrive Olympic Challenge provided not just an opportunity to engage with others in friendly competition, but it also brought residents closer together, collaborating in fellowship and giving, and contributing to a much greater common purpose: to help other people in need in the greater community-- for PSL residents, 'tis the season.

Looking for an opportunity to give back this holiday season? This year, Presbyterian Senior Living is participating in GivingTuesday in an effort to give back to the residents we serve. Visit www.psl.org/tuesday to learn more about the event and how you can donate today. A little from a lot goes a long way!

Jim Mangol, Corporate Director of Thrive Wellness, supports PSL’s Thrive Wellness initiative, volunteer programming, and fitness centers. Jim has served in senior living wellness for 20 years, bringing with him extensive experience in aging services as well as, health and wellness at non-profit CCRCs. He is well known to PSL as he has been a consultant since 2016 for our Fitness and Aquatic Center programming. Jim is a graduate of Temple University with a Bachelor of Science degree in Kinesiology, as well as a 2015 graduate of the Leading Age PA Fellows in Leadership program. He is currently pursuing his Masters in Healthcare Administration degree at Delaware Valley University. Jim is an active member of the International Council on Active Aging, and the Senior Exercise Professionals of PA. Jim lives in Hatfield, PA with his wife Shannon, 3 sons: Aiden, Austin, and Anthony, an 18 year old cat named Lynnx, and a 6 month old puppy rescue named Nala. He enjoys spending time with his family, spending time outdoors, coaching youth baseball, and teaching CCD/REC.