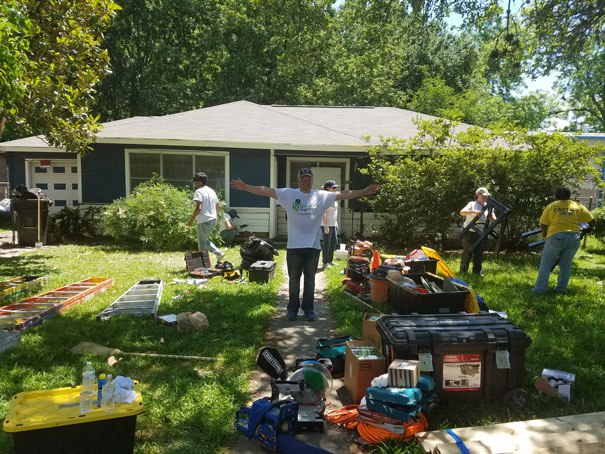 “Everything in an organization is about what happens next. Nothing we do is accomplished without people.” – Steve Proctor, CEO

Roughly 6 years ago, CEO Steve Proctor and Senior Vice President for Corporate Relations MaryAnne Adamczyck designed a program to develop Presbyterian Senior Living employees into future leaders of the organization. The program, aptly named the Talent Management Program, has the goal of taking current PSL employees who possess our organization's values, have a good track record and have great commitment to our mission and providing them with an opportunity to grow into new positions within PSL. By growing our organization from within, we can ensure the quality of our future leaders.

Each year, a group of five individuals are nominated into the program. These individuals are PSL employees who have been employed for at least five years and must have a reference from their supervisor. In an effort to have a balanced team, individuals are chosen from various departments, with the goal of building a team of people that would not typically work with one another. This thought diversity helps future leaders to have a wider outlook by understanding the mindset of coworkers in a completely different environment from them. This can help accountants understand why nurses worry about certain things, or show sales directors how people in human resources see the world. 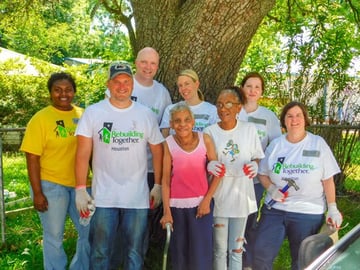 This year’s Talent Management Program comprised of these five participants:

After the team is built, Proctor and Adamczyck assign them a project that they will work on for the next year. In the past, teams have worked on projects that range from property development, to resident focused technology, to environmental stewardship and sustainability.

This year, the talent management team was assigned a two part project: to come up with an emergency preparedness plan for natural disasters, and to try to immerse themselves in a real-life disaster situation.

Steve Proctor reflected on his process for deciding the project: "When I was thinking through what to assign for this year's project, I thought about how many major disasters happened last year– from devastations in Florida, wildfires in California, flooding in Houston, and so much more. This made me reflect and think about this organization."

"I wanted to know we could be prepared for a disaster, so I thought this project would be a great entrée to how we would come up with a plan to protect our population. I didn't want the group to just read about seniors in crises or interview people from afar; I thought it was important to get into the mindset of a senior who is going through something like that. The only way to do that is to go to a place where a disaster has happened and spend time there," Proctor continues.

After the project was assigned, the team was left to come up with how they wanted to carry out these two goals. In beginning their research for the project, the team discovered that a PSL board member, Reverend Alf Halvorson, lived through Hurricane Harvey, which devastated parts of Texas in August of 2017. The team got in contact with Rev. Halvorson and heard his stories about the devastation that Harvey brought and how there are hundreds of Houston residents still in desperate need of assistance. 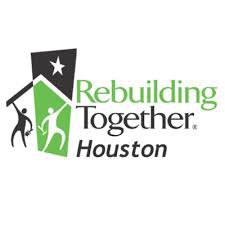 According to Jerry Davis, Vice Mayor Pro-Tem City of Houston, "The work of Rebuilding Together is transformational. Homeowners and volunteers alike will carry this experience with them for the rest of their lives."

Rebuilding Together Houston coordinated with the talent management team and scheduled them to work on a 79-year-old resident's home for three days. Evelyn, the resident, has been out of her home and living with her daughter since August of 2017. When the crew began work on her home, Evelyn hadn't been living there for ten months.  Both Evelyn and her daughter Janice were on the property for two of the three days.

When the five team members arrived to the home, they were not completely sure of what to expect. They had little to no experience using power tools, doing home repair, etc. After diving in head first to the project,  the team soon realized that the devastation to the home was much worse than they had expected. 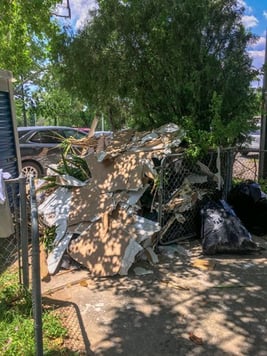 According to Nicole Bowser, "The very first day there was a massive pile of trash from all of the debris that had been scattered throughout the property. So we started with that by taking many trips back and forth to get it all into the dumpster. We had to take off a lot of rotted boards. The entire house was covered in wood siding so when the water level rose, four feet of that board had been compromised with mold and termite damage. We also did a lot of mold remediation inside the house, replaced siding and windows, and did a lot of painting to make the outside of the house look nice again.”

Jill Wertz commented, “All the Texans there kept telling us how lucky we were because the humidy wasn’t as bad as it could have been, but it was hot. We were very warm, but we took a lot of breaks, we made sure we were drinking plenty of water to take care of ourselves. I didn’t want to tank out at the very start of things.”

“I was worried I wouldn’t be as helpful as other volunteers that were coming in. So we all joked that all of us were hoping we could paint. But I was willing to give it a shot, and I learned a lot! I got to use some power tools which was pretty scary but also really fun, too.”

Over their three-day work period, the team focused on taking out damaged drywall, removing siding that had been damaged by mold and termites, replacing studs within the walls, repainting new siding, etc.

Ryan Knisely explained, "The main goal was to repair the outside of the house so that when we left, contractors could come in and floor it, take care of the plumbing, and really make it livable again." 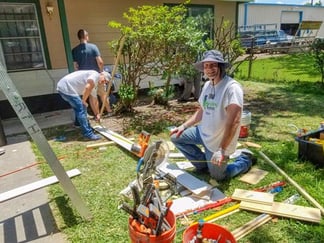 According to Rob McFadden, “Working together on this type of project really took me back to the fundamentals. Something that I would think of as a simple task like using a sawzall or chop saw had to be explained in a way that would allow us to be efficient while keeping everyone safe. We knew we only had a limited amount of time there and we wanted to do as much as we could, but it was really hot and it was important that we paced ourselves, which was difficult.”

When the three-day work period came to an end, the team left with Evelyn's spirits high and the house looking 100 times better than when they had started. 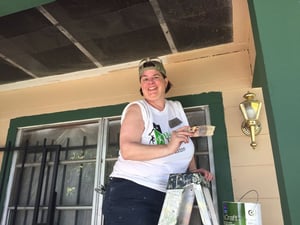 Cindy Fox reflected on the experience, "You can talk about volunteering, or donating money or fundraising, but it was actually seeing the person, seeing how they live that brought the reality of it. The thing that I remember most was as she watched her house being transformed, she had a smile on her face the whole time. She was just beaming.”

As the team boarded their flight back to Pennsylvania, they felt confident knowing that the work they had done made an impact on one woman who had been displaced for the last ten months. The work that they completed ensured that Evelyn would be back at home soon, a feeling that was humbling to all five team members. 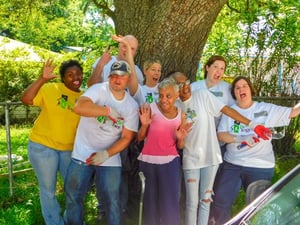 "I always want to help, but have a hard time being able to when factoring in logistics such as cost, time off work, etc. Presbyterian Senior Living allowed this experience to be part of the job. Allowing people with varying and important responsibilities within the organization to take the time and totally withdraw from our core job roles and be able to go do actual manual labor and help someone is just incredibly impressive. This really illustrates to me that PSL lives the mission." – Ryan Knisely.

To see how Presbyterian Senior Living is making a difference in your community, download our 2017 Community Benefit Report!