Measured in Miles Not Years: 86 Year Old Hikes Across the Globe

Since 1988, the United States has recognized National Senior Citizens Day on August 21. President Ronald Regan declared this day a national holiday to show senior citizens our appreciation and support and acknowledge their accomplishments. Today, senior citizens are more active than ever in their communities and the workforce. They still contribute heavily to our society, and for what they have achieved and continue to achieve, they deserve our thanks.

At Presbyterian Senior Living, we are blessed to be able to serve thousands of seniors, all of whom bring their own unique set of knowledge, stories, talents, and abilities.To celebrate National Senior Citizens Day, we are highlighting one resident who is the epitome of aging with grace. Diane Gibson, 86, of Glen Meadows Retirement Community has spent years spreading her talents to the public and continues to share new skills and interests with her peers. 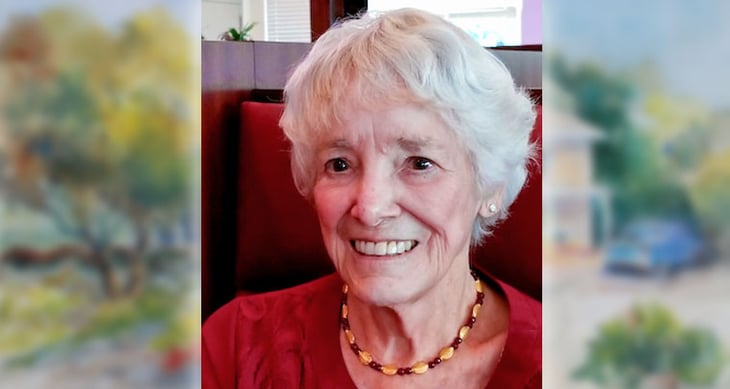 Diane has a wide variety of hobbies, including painting and jewelry making, but she has one that sets her apart: hiking. Now, many seniors hike, no big deal, right?

Wrong. Diane has spent years traveling the world, sometimes hiking more than 200 miles on a given trek. At the age of 86, she completed a 64-mile hike up the coast of the United Kingdom using only a compass and a map to guide her (more on that later)!

As an active resident of Glen Meadows Retirement Community, Diane spends her time (when she is not training for an upcoming hiking trip) teaching watercolor painting and jewelry making classes to her peers as well as participating in a women's discussion group, a book club, and an exercise class.

"A lot of my ability to remain this active is due to my curiosity. I have a great many interests that I aim to pursue. This keeps me not only physically active but socially and intellectually active as well."

Now retired, Diane is a registered occupational therapist and was formerly the Director of Rehabilitation Services at Sheppard Pratt Hospital in Townson, MD. Her late husband, Robert Gibson, was the Medical Director and later  President of the same hospital for 35 years — a perk she said gave her many opportunities to travel the world. During her career as an occupational therapist, Diane put value on physical well-being. Not only did she value this for herself, but she also valued physical health for her patients. She always worked hard to help each person she served solve problems and work to become a better version of themselves.

Because staying physically active was very important to her, Diane took an interest in hiking. This activity allowed her to explore her love of ancient cultures, archeology, and geography, all while keeping her physical health in top shape. This hobby was a venture that she and her husband started together. Throughout her hiking career, Diane has hiked various places in the world, including England, France, Italy, Switzerland, Peru, and Nepal, to name a few.

Today, Diane aims to take two long distance hiking trips each year, generally in the spring or fall. She signs up with travel companies to secure accommodations and read about known paths. She makes sure to check seasonal weather to provide for the most comfortable conditions. Prior to leaving, Diane does thorough research into which trails are open to the public and which are not, and makes sure the route is accessible for her activity level.

To prepare for her hiking trips, Diane keeps active to ensure she is in shape to handle the long routes she takes. She usually hikes 4 miles twice a week. For practice, she will often hike the trail along the Gunpowder River, an irregular trail near her home at Glen Meadows. On days when the weather is poor, she takes advantage of the community fitness center and will do 30 minutes of walking on the treadmill to keep up her stamina.

Diane used to hike with groups of people, but she now prefers to only travel with one partner. She says it gives her more freedom to mull about when she finds something that piques her interest rather than having to keep a schedule with a group.

In May of 2018, Diane spent two weeks hiking the Northumberland Coast Path along the Eastern coast of the United Kingdom leading up to Scotland. During this venture, she traveled 64 miles with one hiking partner. They hiked from  10 to 15 miles each day and took only a day pack with lunch, water, camera and a first aid kit. Overnight, she would stay at airbnbs along the way. During this trip, she used  a map, a compass and a guide book to use as directional guidance. 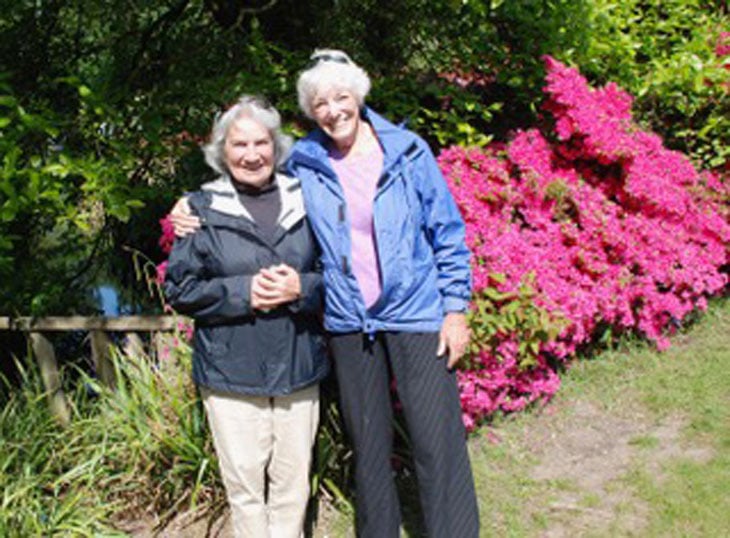 Diane says she loved getting to see the difference and evolution of the English language during this particular trek. She encountered many locals while making her way up the coast. One experience she says really highlighted the difference in America's English from England's English was a conversation she had with an English hiker:

"I ran into another hiker and complimented her on her knickers, thinking that was the term for the type of knee pants she had on. She seemed insulted to my surprise, to which she then explained that in English culture, knickers means underwear and knickerbockers were the type of pants she had on."

During one adventure, she details a run-in she had with a herd of local cows:

"I always had a perception that cows were rather docile and friendly creatures. To my surprise, I found myself running from a group of cows chasing me, so I had to jump over the fence to get away from them! This situation is certainly a funny memory that pops into my mind when I think of my most recent trip."

Diane enjoyed her time learning about the rich history of the area while exploring ruins and painting watercolor renditions of the landscape along the way.

On October 1, 2019, Diane plans to embark on her next adventure: hiking 65 miles on the Isle of Wight Coastal Path. This next hike requires her to take a hovercraft from southern England to the Isle of Wight.

"I chose this trip because of the drama of the ocean and the sea cliffs and the way the waves crash against the rocks. As a painter, I am excited to spend the late afternoons painting the dramatic landscape of the cliffs while learning more about the area's history and geography and taking in the natural beauty of the region."

Diane continues her hikes through England because she is so fascinated with English culture and all the history and beauty that the landscape holds.

At 86 years old, Diane has no plans to slow down any time soon. Her love of what she does continues to motivate her forward. She attributes her good health to her curiosity and her gumption to pursue the things she enjoys.

Diane says she thinks it is important for older people to substitute daily passive activities, like sitting on the couch or only watching TV, for something that interests them. Doing this will allow them to increase their confidence and remain physically, mentally, socially, and intellectually active as they age.

Our world would not be where it is today without the seniors of our society. To those seniors who have helped forge our path and contributed (and continue to contribute) to our community's growth as a whole, we thank you!

Diane attributes much of her successful aging to Glen Meadow's Masterpiece Living program, which motivates participants to remain active in four pillars of life: physical, social, intellectual, and spiritual. For more information on how Continuing Care Retirement Communities can enrich your life, download our free eBook today!